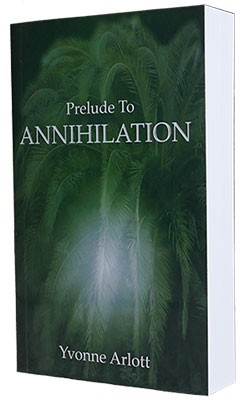 Free delivery to the UK

This title is also available as a Kindle eBook that can be purchased on Amazon Kindle.

Prelude To Annihilation focuses on the struggle a group of people face after aliens come looking for a mysterious device and launch a deadly attack on the world, forcing the survivors to flee into underground shelters.

When aliens arrive on Earth, giving humans an ultimatum to hand over "the device" or be destroyed the government claims to have no idea what they are referring to. In the ensuing and deadly attack the remnants of the human race are forced to flee into underground shelters. It is in one such shelter that a mysterious door is discovered and a team of people investigate only to find something even more sinister lurking deep under the Earth’s surface.

As Joshua Forbes and the rest of the team venture further underground they unravel a startling truth reaching far beyond the scope of the entire universe.

I really enjoyed it. Good characterisation, lots of action and strong science fiction. I also really liked the underground setting, which was described very well. I was intrigued by the mysterious 'device' throughout. Congratulations, Yvonne It's a fine book!